The hedgehog powered Twitter bot and the man behind it

Was passively poking around Hackernews this evening reading a really cool thread titled: “What projects are you working on?” when I stumbled upon an answer that piqued my interest.

Apparently a Chilean programmer named Jose Luis Honorato took it upon himself to connect his hedgehog “Antu” to Twitter. 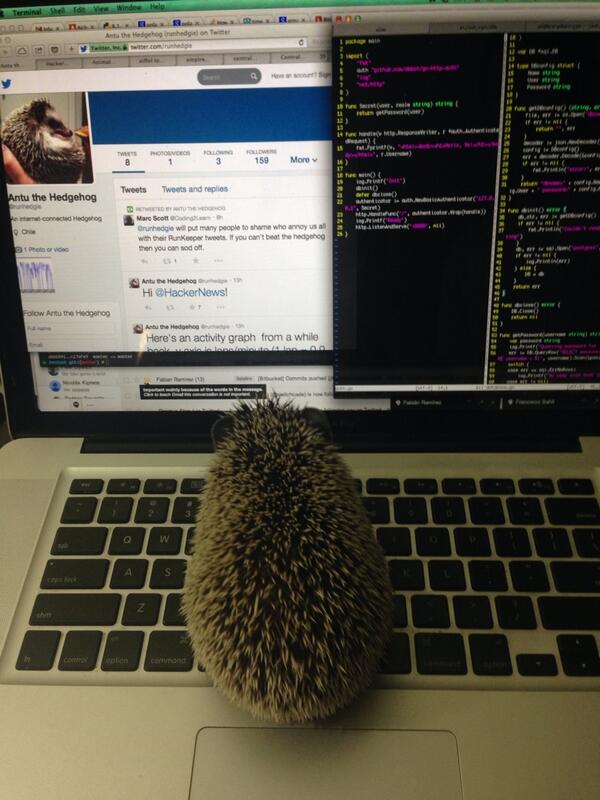 Once the hedgehog starts running, a Raspberry Pi counts how many rotations the wheel makes. From there it beams the info over to another node, his computer I am guessing. At some point the information is parsed and sent via API to twitter in the form of a Tweet. (just guessing, several technologies I am not familiar with)

If you are looking to see exactly how the system is setup, Jose was kind enough to write a post about it on his really wicked smart blog. He also threw all of the code up on Github.

All Tweets are then further parsed depending on the distance Antu ran that day. For instance on a short day here merely Tweeted:

Didn’t feel like running yesterday, I did only 0.4 km

On a day where Antu runs a littler further he will Tweet out something different such as:

Pretty cool right? This takes a lot of talent to put togehter. It is one thing scraping together enough Python to talk to Twitter’s API,but the soldering, hardware and programming takes a lot of smarts. Well done Jose!

I also had the opportunity to learn a little bit more about Hedgehogs. They are primarily nocturnal and do most of their running at night (kind of like programmers.) I also found out that they have quills kind of like porcupines, which can be kind of painful but if raised properly these little creatures can be very friendly.